In October 2021, I’m releasing a book in a brand, spankin-new series. The series is called the Lone Wolves MC. It’s a story about rival motorcycle clubs, who also happen to be wolf shifters, and it’s for sure a reverse harem, because I, LOVE. THEM.

But it’s more. I’ve had a lot of time to work on this, to plot it out, and I’m so, so excited to get this out into the world.

Look at this gorgeous, gorgeous cover! 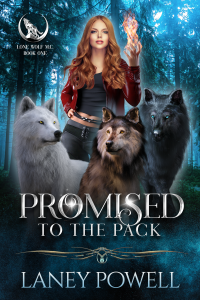 That’s Lena and her pack.

I’m done being the good girl.

If I’ve learned anything in my almost twenty-one years, it’s that always doing what I am told has got me absolutely nothing and nowhere. Exhibit A: my cheating fiancé. Not only do I catch him red-handed on the night before our wedding, but he’s sleeping with Exhibit B: my supposed best friend. This leads to Exhibit C: the part where I take off the blinders, take off the gloves, and take control.

I kick Exhibit A where it hurts, steal his prized bike, and make a beeline down the road of revenge straight into the arms of Exhibit D: Bran Blackwood. To call the Blackwood wolf pack rivals is the king of all understatements. As a Darkbane myself, I shouldn’t even be near him. I know better than to set one toe on enemy territory. I should have kept on riding, but one touch of Bran’s hand, and I’m unwilling to deny myself. And that’s before I meet Exhibits E and F, his brothers Alec and Conan. Once I met Bran, I was lost. Add in Alec and Conan, and I can neither yield nor let go.

Take a ride with Promised to the Pack, book one of the Lone Wolves MC, the newest reverse harem series from bestselling author, Laney Powell. Follow the tale of a sassy heroine who comes into her own in a way she never expected, with three strong, growly wolf shifters at her side to reclaim all that’s been taken from her.

Get Promised to the Pack in Hearts Unleashed, and Follow me on Amazon or Sign up for my Newsletter for news of the next book in the Lone Wolves MC series!