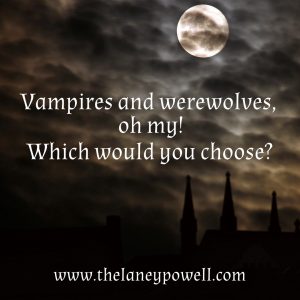 This week, it’s back to paranormal romance. In addition to reverse harem, I’m going to do either vampires or shifters as a new series. I haven’t decided which as of yet. I wanted to go back to the things that first got me into PNR. For me, it was Interview with a Vampire. I was mad there wasn’t more romance between Louis and Lestat – it was tortured and dramatic as hell – but it wasn’t as romantic as I wanted. So from there, I went in search of more. It’s also the idea that there is more going on in this world than we see. Magic and mysticism. LOL, and honestly, who doesn’t love the idea of an age old being finding one of us, a human, irresistible?

Like I said, I’m not sure which one will grab the spot. As someone who plans my series out, having a little freedom and flexibility feels good and exciting and a bit like I’m breaking the rules.