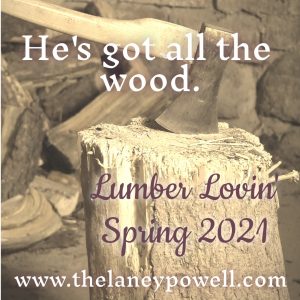 This week, we’re going to jump back to contemporary romance. Last year, I wrote a series called Broken Falls Ranch. There are a couple of novellas, and five full length novels. It’s about a man who wants to make a haven for ex-military men who are hurt. And I fell in love with all those characters. In the last novel, His Forever, we briefly met three brothers who were being forced to sell their family ranch after their father passed away. (He hid the financial troubles from his sons right up to his death.) They’re left with few options. But the one thing they do have is a piece of land with timber rights out in Oregon, and when you have nowhere else to go, you go where you can. All three pack up and leave Paulson, Montana, and head to the Pacific Northwest.

The series is called Lumber Lovin’. It’s a trilogy, and will give each of my brokenhearted brothers a happily ever after. Because that’s what’s important – that we find not only what we want, but what we need, and live happily ever after.

See you next week!
xoxo,
Laney